Ed’s goal-scoring stats during the three seasons he has been with the Stutes is nothing less than outstanding.  His record of a goal every other game during the 17/18 season proved to be anything other than a flash in the pan.  The following season his goal-scoring partnership with Dan Brown swept aside everything that Eastern Counties League defences put in their way as the pair registered 18 league goals each (still 2 less than Max York!) on the way to the League Championship.

But could he do it at the higher level following promotion?  Could he heck!  You cannot argue with a record of 18 goals in 36 appearances and a place amongst the league’s top scorers for much of the aborted 19/20 season.  Ed’s career record with the Stutes now stands at 58 goals in 120 matches in all competitions.  Watch out Kendo, your club record is under attack. 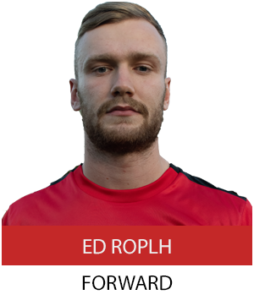 PLAYER OF THE YEAR:  Smudge.  A leader on the pitch, always encouraging.  I have leant a lot from him in my time here. Shame he owes me 20 quid for scoring less than me this season.

WORST DRESSED:  Swinton.  Terrible clobber. Had to order a load more rubbish gear to my house so his parents didn’t find out!

WORST MOMENT THIS SEASON:   New Year’s Day at Sudbury.  Awful performance and a result that hurt.