Dan Brown holds the record for playing in every game this season.  Come rain or shine, league or cup, Brownie was there, leaving the opposition mystified with his deceptive athleticism and sometimes unorthodox technique.  Whether his impressive run of consecutive appearances is down to the hard work put in on the training ground or his unequalled technical ability, we will never know.  But, the records will for ever show that Brownie hit the net on 15 occasions in his 41 appearances this season.

Dan’s achievement this season should come as no surprise given that he recorded over a goal every other game in 2018/19.  His 26 goals for the season was one short of Max York’s total, but came in just 48 games including 8 as a substitute.  But even this impressive strike rate fails to live up to the record of 8 in 9 games in the 2017/18 season.  Little wonder that Dan has not one but two Eastern Counties League Champions trophies having previously one the title with Mildenhall Town in 2016/17. 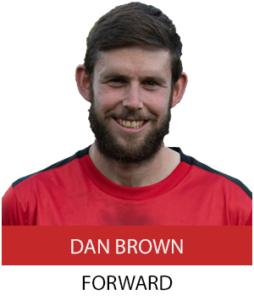 PLAYER OF THE YEAR:  Chivers for me, apart for all the penalties he gives away he’s been a rock at the back.

FUNNIEST PLAYER:   Swints. 24/7 comedian but also a big baby on his day.

HARDEST MAN:   Bunch of softies but, if I had to, I’d give it to Evan.

WORST DRESSED:  Evan and the Gaffer. The fact that they wear the same boxers says it all.

WORST MOMENT THIS SEASON:   Losing in the dying seconds to Bury.

Dan was sponsored last season by Ewan and Iona Benstead.