The premature end to the season could not have come at a worse time for Andy Ballester.  Just as he was coming back from a niggling and persistent hamstring injury incurred in early January the shutters came down on the season, denying Andy the chance to remind us of his majestic Spanish style and footballing artistry until next season.

Andy is never short of pace and his surging runs from deep positions often strike fear into opposing defences. Since joining the Stutes from Cherry Hinton at the start of the 2018/19 season, he has seldom failed to impress at either right or left back.  He has accumulated 67 appearances in total, scoring just the one goal, but can you remember who it was against?

Andy’s reflections on the season are as follows; 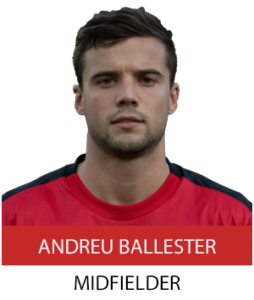 PLAYER OF THE YEAR:   Ed Rolph due to his superb performances.

HARDEST MAN:  Max York or Ed Rolph, both are twice my size.

WORST MOMENT THIS SEASON:   Defeat by 5-1 against the team bottom of the league.

BEST/FUNNIEST MOMENT THIS SEASON:   The late win against Cambridge City.  Max York knows how to score goals in the last minute.

Andy was sponsored last season by John and Shirley Hipkiss.