Due to an unprecedented twist of fate, the Isthmian League record books will show that Buster has yet to play a game for the Stutes.  Due to the records for last season being expunged, they will not show that he played for us against two of his former employers in Soham Town Rangers and Cambridge City.  However, our own club appearances statistics show that Buster made 35 appearances last season, scoring just the one goal against Ware in the Velocity Trophy.

Due to Buster’s extensive experience around the local football scene, Lance knew exactly what to expect when he signed the 34-year-old from Godmanchester Rovers at the start of the season.  Being naturally left footed and having experience of the Isthmian League while at Soham meant that Buster had much to pass on to his new team-mates.

Buster gives us his reflections on the season that never was in the following answers to our questions. 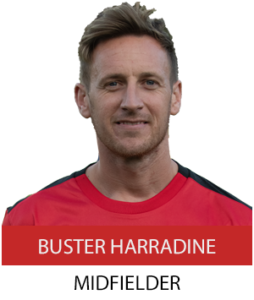 PLAYER OF THE YEAR:   I have to say Zukes.  A class player who can play anywhere.  A match winner on his own in some games. Could go on to a higher level.

FUNNIEST PLAYER:   got a few funny characters in the changing room, everyone has their moment.

HARDEST MAN:  Swints loves to put it about on the pitch, as does Ed Rolph. If we were to have a royal rumble, I think Yorky would win.  The geezer is as strong as hell.

BIGGEST MOANER:  If things aren’t done right in training or in warm up, Smudger loves to have a little moan.  Swints loves a little moan about everything and anything, likewise George Coy.  Never seen him smile.

BEST DRESSED:  Swints always has fresh clobber.  So too does Zukes.

BEST TRAINER:   Definitely not Chivers or Yorky.  Don’t think they finished a training session all season.

BEST TECHNICALLY:  Smudger has the footballing brain and Yorky is the best finisher, but all round I have to say Zukes.

WORST MOMENT THIS SEASON:   Bury Town away.  I’m sure you all know why.

BEST/FUNNIEST MOMENT THIS SEASON:   Forgetting the kit away to Rushden and Keysey’s car window getting smashed at Great Wakering from one of our own players wayward shots.