Key the younger started his football career as a youngster at Bury Town before moving to Biggleswade Town, where he quickly became a first team regular.  The 25-year-old would most likely have recorded his 200th appearance for the club last season had it not been for the cancelation of our remaining ten matches.

With 193 first team appearances to his name, Evan holds the second highest total in the current first team squad.  Those appearances have been spread across six seasons since signing for the Stutes from Biggleswade Town in September 2014 when we were members of the Southern League Premier Division.

After settling into a centre back role with the club, Evan later found his niche in midfield.  But whatever the starting position, Evan has frequently featured on the scoresheet and is particularly dangerous when on the end of a corner kick or a Max York long throw.  He has found the net on 28 occasions in all.

Evan’s recollections of the 2019/20 season are as follows; 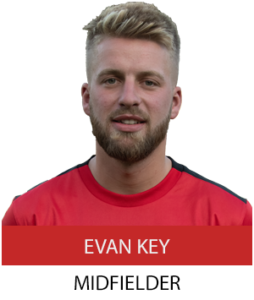 PLAYER OF THE YEAR:   Lee Smith.  Although he is my brother, he’s played at a very good level and sets a good example on the pitch.

FUNNIEST PLAYER:   Simon Swinton.  When he’s not sulking or being a baby he has definitely got that funny side to him.

HARDEST MAN:   Max York. Lifts the most weights, so it must mean he is the hardest.

BIGGEST MOANER:  Max York.  Not much he doesn’t moan about to be honest.

BEST DRESSED:   Ed Rolph.  Never wears any socks on a night out but still looks decent.

BEST TECHNICALLY:  Could have been Max, but Zuko without a doubt.  Makes it look easy with both feet.

WORST MOMENT THIS SEASON:   Matt Green and Robert Ruddy both leaving the club at the same time, holding hands and joining Mildenhall (haha).

BEST/FUNNIEST MOMENT THIS SEASON:   The Gaffer forgetting the first team kit against AFC Rushden and we had to wear their 3rd choice kit.