Simon has made a name for himself as a combative midfield player during the two years he has been with the Stutes but has also shown the versatility to play elsewhere on the pitch when required to do so by the Gaffer.  Having started the season playing at right back, he has also appeared in a more advanced midfield role and even as an emergency striker.  Who will ever forget the thunderous shot from outside the box that put us on the road to a 3-0 victory at Canvey Island last November?  And in the following game he was in the right place at the right time to help us secure a second consecutive 3-0 win, this time over Bury Town.

Simon featured in the starting line-up on 25 occasions this season, adding a further 10 appearances from the bench and recording 4 goals in all competitions.  But it is the yellow card count that tells the story of Simon’s latest campaign.  There were 12 in total, gained for a wide variety of offences, which again confirms that Simon has the versatility in finding any number of ways to infringe the Laws of the game.

Simon has given the following answers to the all-important questions on the 2019/20 season. 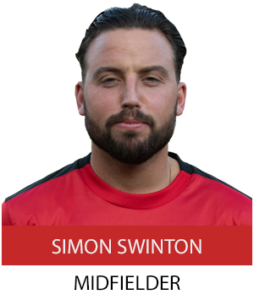 PLAYER OF THE YEAR:   Zuko, can win you a game off the flip of a coin and always got a bit of magic up his sleeve. Fastest I’ve ever seen too!

FUNNIEST PLAYER:   Me.  All the boys seem to laugh at me all the time.

HARDEST MAN:  Evan Key – Maybe just because he’s one of the biggest!  Loves a tackle.

BIGGEST MOANER:  Max York.  Loves a moan does the Skip.  His way or no way.

WORST DRESSED:  James Chivers.  Some of his clobber you wouldn’t be paid to wear!

BEST DRESSED:  Me – Always getting compliments from all over the club

BEST TECHNICALLY:  Lee Smith.  Both footed and very rarely gives the ball away. He’s played for England C as well if you didn’t already know.  Yorky right up there too.

WORST MOMENT THIS SEASON:   When Chivers’ Dad built the wall out in the home changing room and didn’t build it all the way along.

BEST/FUNNIEST MOMENT THIS SEASON:  When Keysy forgot the first team kit at Rushden away. We had to wear THEIR 3rd kit!!!

Simon Swinton was sponsored last season by Vic and Amanda from the club bar and food outlet.

More from the squad coming soon