There are some players who just can’t bear to be parted from Histon FC and Sam Roach is one of them.  Sam’s started his affiliation with all things red and black at the Histon academy but his talents and potential between the sticks were soon spotted by Leyton Orient who duly signed him up.  However, Sam was back at Bridge Road again at the back end of the 2016/17 season when Lance Key, who knows a fair bit about goalkeeping himself, secured his services on loan from the O’s.

The following summer Sam joined Mildenhall Town but was back at Histon for a third time of asking before the end of the year, replacing Ayden Duffy as the regular wearer of the number one jersey.  Sam has now made a total of 124 appearances for the Stutes in all competitions.

Sam’s answers in our survey of player’s views are as follows; 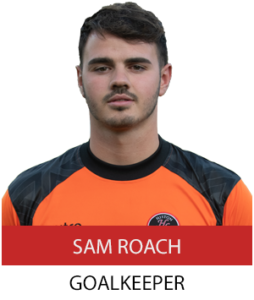 PLAYER OF THE YEAR:   Danny Gould.  Been consistent and always gives everything and effects play.

BEST/FUNNIEST MOMENT THIS SEASON:  Macca trying to clear the ball down
the line, miss-kicking it and falling over.