Marathon man Macca was limited to just 9 starts last season due to injury, but was an integral part of the Stutes defence during our Championship-winning season of 2018/19.  Macca is another graduate from the Histon Scholarship programme, making his first team debut during the memorable 2014/15 season in which we avoided relegation from the Southern League Premier Division.

Macca didn’t hang around for long at the end of that first season as he was off to Australia where he gained valuable experience in the game and added to his impressive collection of tattoos.  On returning to the cooler climate of the UK he re-joined the Stutes in July 2018.  He now has 87 appearances and 5 goals under his belt, but the question everyone wants to know the answer to is whether Macca or Max York have the longest throw.

Lewis’ answers in our survey of player’s views are as follows; 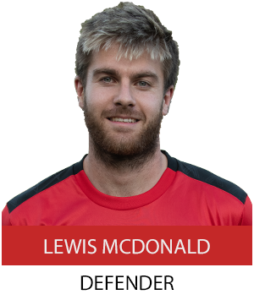 PLAYER OF THE YEAR:   Smudge.  Calming influence on the pitch and one of the lads off it.

FUNNIEST PLAYER:   Swints.  Always up for a laugh or up to something

HARDEST MAN:   Evan (when he gets there on time)

WORST MOMENT THIS SEASON:  Watching from the side-lines injured