Danny doesn’t score ordinary goals.  He only scores goals that are contenders for Goal of the Season.  A buzz of anticipation stems from the Histon faithful whenever Danny finds time and space to unleash a shot from anywhere around the opponent’s penalty area, and not without good reason too.  Left foot or right foot, Danny Gould can score from anywhere.

Known by many as “Zuko” due to his uncanny resemblance to the character Danny Zuko played by John Travolta in the film Grease, he is an Essex boy who completed his Histon Scholarship in 2016.  Comfortable on either flank and with the speed of an express train, Zuko now has 178 club appearances and 19 goals to his name, six of which came during the shortened 2019/20 season.

Danny was voted Player’s Player of the Year in 2017/18 and is well respected by the current squad for his versatility and technical ability, which makes him one of the front runners to lift the title again in 2019/20.

“Zuko” gave us the following answers to the player’s pole. 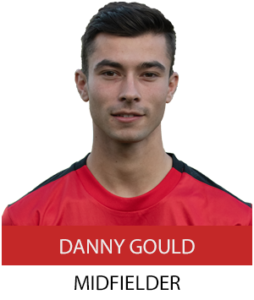 PLAYER OF THE YEAR:   Max York has saved us many a time. Very rarely has a bad game!

FUNNIEST PLAYER:   Simon Swinton.  Always having a laugh and great in the dressing room.  Funny bloke.

HARDEST MAN:   Evan Key.  Loves a tackle.  Glad I haven’t been on the end of one!

BIGGEST MOANER:  Chivers.  Hates the wind, moans when it’s cold and raining and always on the physio bed.

WORST DRESSED:  George Coy has got some terrible clobber.

BEST DRESSED:   It pains me to say this but it’s got to be Simon Swinton.  All designer gear.

BEST TECHNICALLY:  Lee Smith.  A fantastic player who makes it look easy on either foot.

WORST MOMENT THIS SEASON:  Keysey for forgetting the kit away at Rushden and Diamonds, and to top off, I got knocked out and don’t remember a thing!

BEST/FUNNIEST MOMENT THIS SEASON:  Beating Bury away in the FA Cup 2-1 and finishing with 10 men.  Thought it was a great performance.