Histon FC is pleased to announce that current Board member Richard Barlow will succeed John Hall as Chairman of the Club effective from 1 July.

The Club takes this opportunity to thank outgoing Chairman John Hall on all his work for Histon FC. John remains a member of the Board.

I grew up in Histon and Impington in the late 1950’s and the 60’s, and watched Histon FC in the Spartan, Delphian, Athenian, and Eastern Counties leagues. Work subsequently took me away from Cambridgeshire, and I now live in Sandy, so it wasn’t until the glory days under Steve Fallon that I became a regular attendee at Bridge Road again. I was one of the founding members of HIST, the independent supporters’ trust, and acted as its Secretary, becoming a HIST representative on the Histon FC Board in 2014. More recently I have been a Director of the Club since 2018.

Away from football I have been the chief executive of a major pension scheme, chairman of a town twinning association and a community safety group, and editor of a local history magazine.

Some of the things I have done for the Club – written Board minutes, drafted contracts and codes of conduct, prepared policy documents, researched 3G football turf pitch arrangements, implemented pension arrangements, represented the Club in discussions with other parties, planted trees, painted fences, cleared litter, emptied dustbins, sold Golden Goal tickets, made stadium announcements, cut back undergrowth, forked the pitch, manned the stall at the Feast Festival, operated the turnstile, supervised the carpark, and become a shareholder.

I am fortunate to be following in the footsteps of John Hall who has done a wonderful job in his period as Chairman, and am delighted that Lynn Kemp, Clint Lanham, John Payne and Matt Payne, as well as John Hall, are all staying on as members of the Board. Keith Nichols and Howard Wilkins also remain in their vital roles as Head of Finance and Club Secretary, as do Lance Key as First Team Manager and Mark Pleasants as Head of Youth Football. 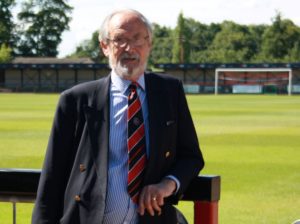 Richard’s Thoughts on the future

It’s odd to be taking over as Chairman when none of our teams can play football, and the scope even for training is very limited.

We need to be positive about the future, and use the space created by Covid-19 to plan and prepare the best we can to achieve success.

Here are my aspirations for Histon FC:

Along with the players, the most important people in our Club are the fans, the volunteers, and the sponsors. We need more of all of you! If you would like to help, please make contact with the Club.

Come on you Stutes!