The Gaffer.  What more is there to say?  Well, we could mention that Lance started his career at Histon before signing for Sheffield Wednesday in 1990 for a fee of £10,000.  Six years with the Owls were followed by spells at Oldham Athletic, Oxford United, Lincoln City, Hartlepool United, Rochdale, Dundee United, Sheffield United, Northwich Victoria, Altrincham and Kingstonian before returning to Histon in September 2004.  That is some road trip!

For those too young to remember, Lance was a member of the Histon team that won the  Southern League and Conference South championships in 2005 and 2007 respectively.  He has since been employed at Rushden and Diamonds and Royston Town as goalkeeping coach and is currently the proprietor of the Hop Bind in Cottenham (directly opposite the Curry Palace) where they serve a lovely pint of ale. 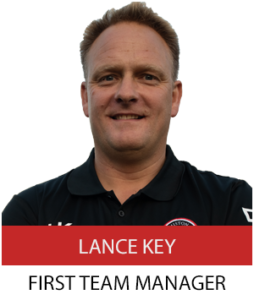 PLAYER OF THE YEAR:   Probably have to go with Ed Rolph.  Unplayable on his day and a real prospect, but if I was to say who has the biggest influence on the team then both Lee and Max lead by example.

FUNNIEST PLAYER:   Not really sure as there’s a few in this team but for different reasons. Simon starts it off, Evan will chip in, Lee becomes personal, George tries to join in and Chivers is the butt of it all.  Oh, and then there’s Simon.

HARDEST PLAYER:  Not sure we have one because we are a team of ballers but Simon is always late in the tackle.  Does that count? Patrick always gets cautioned, but will have to go with Rolphy just for his arms, which don’t go with his body.

BIGGEST MOANER:  Easy, all of them!  But Max and Smudge are certainly right up there.

BEST DRESSED:  Not an easy one, but I’ll probably go for Swints as his hair is never out of place, and he thinks he’s a bit of a ladies man.

WORST DRESSED:  Probably Mark Critoph.  Just awful.  But as for the players, that accolade goes to Smudge. Always looks like he’s been to the charity shop.

BEST TECHNICALLY:  Evan is by far the best header of the ball, Zukes can strike a good ball, Max is two footed, Browny is one footed, so I’ll probably go with George Coy.  Lovely balance and a lefty as well.

WORST MOMENT THIS SEASON:  Any of the games we conceded five in. But probably the Bury away game because that is one game I never want to lose.

BEST/FUNNIEST MOMENT THIS SEASON:  Best would definitely be our home win on Boxing Day to go fourth against our arch rivals!  The funniest? Well it was this year but perhaps not this season, but Simon day kicking a pile of white cones thinking it was a ball, closely followed by someone forgetting the kit at Rushden (Mr Critoph).