James Chivers is the next player to feature in our Players Questions and Answers series.  Many will say that last season was Chivs’ best for the club since signing from Newmarket Town at the start of the 2017/18 season.  The mid-season departure of fellow defenders Sheldon Weinman and Rob Ruddy meant that James had to shoulder a greater share of the defensive responsibilities, but his partnership with Max York at the heart of the defence was growing stronger with every game.

One of the stand-out moment in James’ season was the late equaliser against Soham Town Rangers he got while badly hampered by injury.  From being a goal down with only 5 minutes remaining, we went on to win the tie on penalties.  James featured in 35 matches in all, making a career total of 116 in his three seasons as a Stute.

One remarkable fact about James, of which we are reliably informed, is that he is a direct descendent of the founders of the Chivers Jam company to which the origins of Histon Football Club can be traced.

So, here we go with James’ answers to the same set of questions; 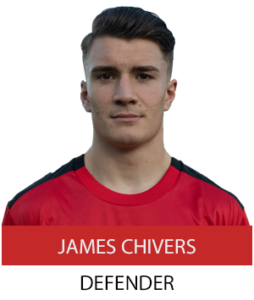 FUNNIEST PLAYER:   I can’t give this to any one person in particular as everyone adds something to the dressing room.  Usual suspects are Swints, Smudge, Ev, Yorky, George and Buster.  I like to throw a few things in the mix too (The Gaffa thinks he has got a bit as well).

HARDEST MAN:  I will give it to Roachy after he decided to drop kick the Bury striker.

BIGGEST MOANER:  A toss-up between Swints and Macca.

WORST DRESSED:  It has got to be Evan and the Gaffa.  They must get the same rascal boxers in their Christmas stockings each year.   Awful.

BEST TECHNICALLY:  Yorky or Smudge.  Probably have to give it to Smudge, purely because Yorky still thinks he’s a number 10 in training.

WORST MOMENT THIS SEASON:   Sorry, but not sorry.  Roachy.  Bury away hurt, although New Year’s Day was pretty terrible as well.

BEST/FUNNIEST MOMENT THIS SEASON:  It has got to be Max’s winner against City on Boxing Day! Beating the old enemy in front of a very good crowd was special.

Keep an eye open for more from the squad soon.