One of the first moves the Gaffer made when taking over the Manager’s job at Bridge Road was to appoint Mark as his Number Two.  Mark is most frequently seen on a match day alongside Lance in the technical area, so may only be recognisable from behind to most fans.  Yet Mark’s contribution to the club goes a lot further than discussing tactical changes and being the butt of the Gaffer’s jokes.

A sports grounds-keeper by trade, Mark was on hand to step in as club groundsman when the position became vacant last season.  It was an indication of the respect and love that those around the club hold for Mark when a small army of volunteers turned up early on a Sunday morning to help fork the pitch to aid drainage prior to the next match.  Where the First team is concerned, there is little that Mark does not contribute to in some way, making him a vital cog in the machine that is Histon FC.

Mark’s views from the touchline are as follows: 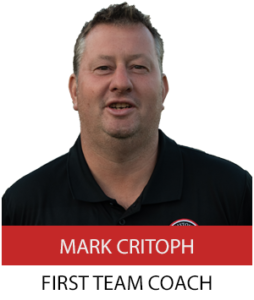 PLAYER OF THE YEAR:   My vote goes to an ex-schoolboy lad James Chivers.  He moved from full back to centre back and made a significant difference by the way he reads a game.  Great season.

HARDMAN:  The Gaffer, wouldn’t get on the wrong side of him.

BEST TECHNICALLY:  No question. Lee Smith by a mile.

WORST MOMENT THIS SEASON:  The way we lost at Coggeshall.  Very poor.