The second player up in our series of Player Questions and Answers is the ever-reliable Pat Bexfield.  Pat has seen his fair share of ups and downs in the four years he has been at the club.  The former Norwich City trainee has made 159 league appearances for the Stutes, which gives him the fourth highest number in the current first team squad.  He made 23 appearances last season and collected 11 yellow cards in the process, thereby disproving the view that he gets cautioned in half the matches he plays in.

Earlier this week we asked if you could name the two players in the current squad who have played more games for the Stutes than Lee Smith.  The answer is Max York (obviously) and Evan Key.  Give yourself half a mark if you said Danny Gould as both Lee and Zuko have played exactly the same number (178). 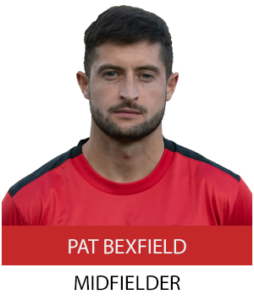 So, here we go with Pat Bexfield’s Questions and Answers.

PLAYER OF THE YEAR:  Lee Smith.  A leader on and off the pitch. Leads more than a few team-mates astray on nights out.  Sometimes goes AWOL for long periods after a Saturday game but can always count on him turning up either hungover or still drunk and putting in a solid twenty minutes stint on a Tuesday night before getting dragged.

FUNNIEST PLAYER:  As a collective, I think we all bounce off each other. I couldn’t single out the comedian of the group, although Simon Day is good value.  We all get a good laugh at his expense.

BIGGEST MOANER:  Max York, “I caaaaaaan’t see.”  Never his fault. If he wasn’t a 24 stone brick s*** house he might get a bit back from everyone else!

BEST TRAINER:   Obviously myself.  Rain, wind or snow, you will see me in my shorts and T-shirt giving 100% every session, absolute no brainier.  (Ed – Some of your team-mates are not in total agreement with you on that, Pat)

BEST TECHNICALLY:  A very tough question to be honest.  In our squad of players, the best at hitting channels and perfected the hook into the corner? Me. Also gifted in the air and can finish comfortably with both the left and right foot. What a player.

WORST MOMENT THIS SEASON:  Every time we have to do one of Simon Day’s FA Level 1 coaching badge warm ups before a game.

BEST/FUNNIEST MOMENT THIS SEASON:  Every time Mark Critoph gets nutmegged in the warm up.

Keep an eye out for more from the squad in the coming days.