What can you say about Max York that hasn’t already been said?  Max swept the board in the 2018/19 player’s awards after leading the team to the ECL Premier Championship and finishing the season as top scorer.  Not bad for a centre-back!  Last season he captained the team to a respectable league position, leading from the front and wearing his heart on his sleeve in every game.

Max made his debut for the Stutes as a 17-year-old central mid-fielder in the Blue Square Bet Premier Division.  Rushden and Diamonds managed to prize him away from Bridge Road for a season and spells with Kettering Town, Biggleswade Town and Bedford Town followed on.  But when Steve Fallon asked Max to return to Histon in 2016 he had no hesitation in returning to his natural habitat.

With 213 appearances to his name, Max tops the “games played” column in the current squad’s statistical tables.  He also stands just four goals short of a half-century.  There is also a chance that his chest measurement exceeds that of any other first team player, but is there a measuring tape long enough to confirm this fact?

Max’s appraisal of the squad he captained last season is as follows: 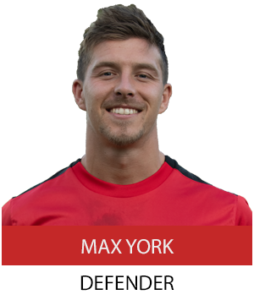 PLAYER OF THE YEAR:   Zukes has been a real threat all year for us. If there’s nothing else on, just “diag” the ball to him and he will produce something.

FUNNIEST PLAYER:   There are a lot of funny lads in that dressing room.  To be fair, everyone contributes.  I love the fact that nobody is safe from having the pee taken out of them at any moment.

BEST TRAINER:  Macca always works hard in training, which is probably why his knees are ruined from playing on 3G!

BIGGEST MOANER:  I’m probably up there, but someone’s gotta moan at people to do their job! Apart from me, Lee Smith, moaning about something hurting and having to come off after 25minutes.

BEST TECHNICALLY:  There are a couple of lads who can strike the ball well on their day, but Zukes always looks comfortable on the ball.

WORST MOMENT THIS SEASON:  New Year’s Day was a big comedown after Boxing Day and Bury away was another rough moment.

BEST/FUNNIEST MOMENT THIS SEASON:  Scoring the last-minute winner on Boxing Day was a great result over our rivals.  Moments like that are priceless.

Max was sponsored last season by The Gould Family.