Today’s game has been POSTPONED due to a waterlogged pitch following a 10:30am inspection. Details for the rearranged date will be published once confirmed.

Tomorrow afternoon, all being well, we welcome Romford to Bridge Road which for them will be their second visit in a week after they took on Cambridge City here last Saturday.

Romford have been in the headlines recently after Glenn Tamplin took over the reins in November and installed himself as manager before setting about completely overhauling the squad. Numerous new players have arrived with the most recent being Cedric Evina and the former Arsenal youngster could become the 80th player used by Romford this season if he is involved tomorrow. 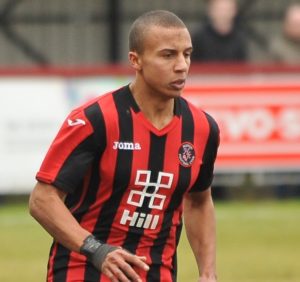 All that upheaval has not turned into points though as our visitors remain anchored to the foot of the table with 8 points gathered from their 16 games so far. Three of those points though came at our expense and Stutes supporters will need no reminding of that day back in October when Dan Brown scored our only goal in a 1-5 reverse.

Lance is likely to be without Andy Ballester again (hamstring) but Lewis McDonald could be available as could versatile defender Miles Smith (pictured left) who has re-joined the club this week. Miles will be available subject to league clearance being received in time.