After last weekend’s battling draw against Bedworth United at The Bridge we are at home again tomorrow when we welcome Loughborough Dynamo, with the chance to continue our decent home form and add more vital points to our tally as we fight to maintain our Step 4 status.

The game at The Newton Fallowell Stadium back in  November was a cracker and ended up with our taking all three points. Ed Rolph scored twice in a couple of first half minutes to turn the game around before Finley Wilkinson put us ahead again on the hour. A see-saw game was eventually decided 4-3 in our favour by Luke Lindsay’s 87th minute winner on a memorable, if freezing cold, afternoon.

The Dynamo have pretty much spent all season in a mid-table position although the New Year saw a run of seven games without a win which didn’t come to an end until a 2-0 victory over Wisbech in early March and last Saturday’s 3-1 win at Yaxley shows that they will be a dangerous opponent tomorrow.

Lance could have Ollie Brookes, Pat Bexfield and Lee Smith available again after all three missed last weekends draw against Bedworth and the Gaffer reports no new injury concerns ahead of tomorrow’s game, although Danny Gould and Andy Ballester are still out.

We are collecting in support of Ukrainian refugees at all of our remaining home games this season and would appreciate your help. At our game against Bedworth United last weekend supporters of both teams together raised a total of £130.35 for which we are very grateful, all of which will go directly to the Disasters Emergency Committee Ukraine Humanitarian Appeal (www.dec.org.uk). 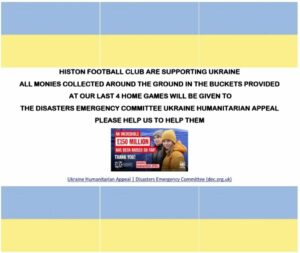 Help us to speed up entry into the ground by getting your tickets in advance through our online ticket site here. Once you have an eTicket it’s just a simple scan when you get here and you’re in, no more standing in the cash turnstile queue! We are also able to take contactless payment but if you want to pay cash then that is fine too, just remember that the cash turnstile can get a bit busy as we near kick-off so try and get here in good time.