Tomorrow afternoon we welcome league leaders Bury Town to Bridge Road as we look to build on last Saturday’s excellent 3-0 win away at Canvey Island and keep in touch with the play-off places.

Town are obviously having a good season so far with their only setback in the league coming at Ram Meadow back in early October when Tilbury took all three points thanks to a 2-1 win. On the road they remain unbeaten in the league with their only dropped points away at Witham Town in their first away game of the season. Cemal Ramadan has been regularly finding the target up front and has 13 goals to his name so far this season including 4 in his last 4 games.

The teams have already met this season of course when we visited Ram Meadow in the FA Cup back in August. Evan Key gave us an early lead in that game before Ryan Stafford levelled things up a few minutes later but Ed Rolph struck the winner just after half time to see us through 2-1.

Tomorrow Lance will have some decisions to make after last Saturday’s result at Canvey came without the suspended duo of Ed Rolph and Pat Bexfield or the injured Danny Gould. All three are back in contention for tomorrow’s game which will give the gaffer a selection headache or two to deal with. Added to that, Lance will need to consider Tuesday’s trip to Brightlinsea Regent in the Velocity Trophy before we face a tough away trip to Coggeshall Town next Saturday.

Kick off at 3:00pm and don’t forget to get your Christmas Raffle Tickets before the game (more details below). 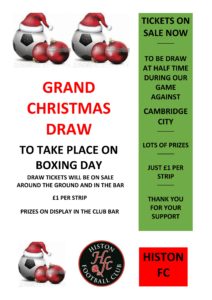