Tomorrow afternoon at Bridge Road we welcome Aveley and with the current league leaders on a run of just one defeat in their last ten, a big game is in prospect.

That run has taken the Millers to the top of the table and has brought and impressive total of 35 goals scored including at least three in nine of those games. Alex Akrofi leads the way with 22 to his name so far but George Sykes and Shad Ngandu are both in double figures themselves and are not far behind.

Of those, only Ngandu was in the side that beat us at Parkside back in September. Danny Gould and Max York had given us a two goal lead that day but Harry Gibbs got one back for the hosts on the stroke of half-time before a Reggie Hubbard double secured the points for the Millers in the second half.

We got back to winning ways last weekend when a Dan Brown brace and another from Evan Key gave us a 3-1 win at Great Wakering Rovers to keep ourselves in amongst the play-off chasing pack. Lance was able to give Miles Smith his third Histon debt in that game after the defender recently rejoined the club. He was taken off after half an hour as a precaution but the manager expects him to be available again tomorrow. Andy Ballester remains the only doubt as he continues to recover from injury.

After the game don’t forget to join us if you can for our Race Night (more details below) and whilst you’re at the game why not pick up a match day programme which this week includes an exclusive interview with club captain Max York in which he talks about his early days at the club, the reasons he returned to us after playing elsewhere and his hopes and ambitions for the future of Histon FC. All for the usual price of just £2.00 and available from your stadium programme vendor prior to the game.

There’s only one Steve-o 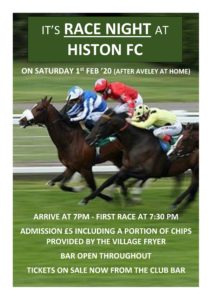