After so long away we finally get back to competitive action on Saturday when we travel Belper Town’s Raygar Stadium for what will be only our second ever encounter with The Nailers.

That previous game came in the 1st Qualifying Round of the FA Trophy back in November 2014 and resulted in a 3-2 win, our fourth in a row at the time with another to follow the next weekend when we beat Dorchester Town 1-0 at The Bridge. James Akintunde put us ahead at the Raygar with around half an hour gone, finishing off a cross from Evan Key. Nick Freeman played Akintunde in again soon after half-time to double our lead but the hosts halved the deficit ten minutes later when Bruno Holden headed past Denzel Gerrar. With less than ten minutes left it was Akintunde’s turn to turn provider, laying the ball into the path of Mateus Kuzimski (now plying his trade in the Polish top flight Ekstraklasa with Warta Poznan) who drove it home from just outside the area. Ashley Burbeary scored a cracker from distance in injury time but it wasn’t enough for our hosts and we went through on the day.

Those of you that were there that day will have fond memories of a decent stadium with good facilities and by all accounts the Raygar has been improved even more in recent years. Directions are below and more information can be found on Town’s website.

Our side will look a bit different to the one that faced Romford at The Bridge in our last competitive game back in October last year but Lance has recruited a number of good players as he rebuilds the squad. There will be a number of players making their Histon debuts on Saturday before we head back home to The Bridge to take on Daventry Town on Tuesday evening and that game is quickly followed by a trip to Newport Pagnell Town in the FA Cup on Saturday week.

Directions: Follow the A6 north from Derby towards Matlock and through Belper until Junction with A517. The ground is on the left just before the traffic lights at this junction. Access to the ground is by the lane next to the church. 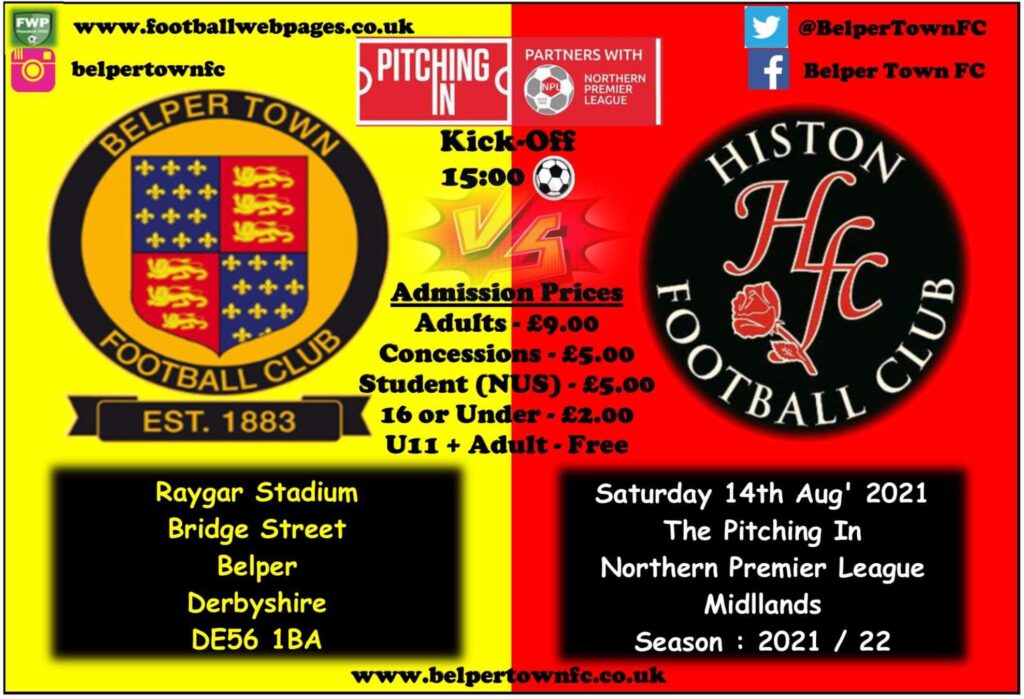