Pre-season friendly matches are not to everyone’s liking. While some fans eagerly await the first opportunity to watch their team play after the summer break, others prefer to contain their enthusiasm until the competitive matches get under way. But whichever camp you fall into, the curtain-raiser to the 2013-14 season against Champions League opposition will for ever have a place in Histon folklore.

This most unlikely of match-ups came at a time when the glory days of Steve Fallon and the village team’s challenge for Football League status had sadly melted away. After avoiding relegation by the narrowest of margins the previous season, Brian Page had been busy over the summer putting together a team of mainly young players on whom our hopes for a second season in the Conference League North would rest. The pre-season schedule had already been a hectic one with home friendlies against Brentford, Colchester United, Braintree Town and Luton Town already under our belt, but no fixture was scheduled for the last weekend before the league season was due to begin. That was until club secretary Howard Wilkins received a phone call late on the Friday night.

News had reached Brian Page that Tottenham Hotspur had to pulled out of a behind closed doors match against Champions League qualifiers Real Sociedad that they were due to host at their training ground the following day. Given that most other clubs in the south of England already had matches arranged, the Spanish giants from the Basque city of San Sebastian were franticly looking for some last-minute opposition to play against as part of their pre-season UK tour. Howard takes up the story of an incredible 24 hours from this point.

“I got a phone call at about 9 O’clock on the Friday evening from Brian Page saying that he had been asked if Histon were willing and able to host Real Sociedad the following day. After a lengthy exchange with Brian to establish that this was not an elaborate late-night winding-up, we concluded that it was a genuine request. I made some phone calls to people within the club to find out if there was any reason why we couldn’t do this and then spoke to the FA whose permission we had to obtain for such a match. Having received the go-ahead from all concerned, I then had to find match officials who were qualified to a suitably high level to referee the game. So, by the time I went to sleep that night we pretty well had all the necessities in place for the game to take place the following day.”

“In the morning, I made a few more phone call just to establish that I hadn’t imagined the previous night’s proceedings and that the game was still a reality. I then spoke with the safety people as at the time we were subject to safety certification requirements. It was they who explained that if we announce this fixture we would inevitably get a crowd of a reasonable size wishing to attend and given the short time available before the agreed 3pm kick-off, it would not be possible to get the required number of stewards and other essential staff on site in time. Therefore, we could only play the game behind closed doors and with no pre-match announcements. So, that is what we did.”

Meanwhile, the players reported in for the first of two training sessions that Brian had arranged for the Saturday morning. Not until they arrived did the manager mention that his plans had altered overnight and that in a couple of hours they would be playing a friendly match against a Spanish La Liga club’s First eleven. As Howard recalls, “Shortly after our players arrived at the ground, a rather plush and expensive coach pulled into the club car park and a team of Champions League players stepped out of it! A Spanish media team were here to film the team’s arrival and a handful of Sociedad supporters who were following the team on their UK tour had also found their way into the ground, but the whole situation still seemed very surreal. Despite our facilities not being quite what the Sociedad players were expecting that day, they were all very good about it. Only when a rather large dog belonging to one of our Directors wandered into their dressing room for a look around did some of them question where they were, but otherwise they were as good as gold.”

The game itself was reported to be an entertaining one with both sides passing the ball and playing some good football. Our visitors not surprisingly dominated possession but the young Stutes stuck to their task, holding their own until two goals late in the first half gave Real the lead going into the break. The second half carried on in much the same vein as Brian Page made a number of changes. Real looked stronger and stronger as the game wore on and made their superiority count, running out 8-1 winners as the home side faded. The teams that day were as follows;

Howard’s feelings after the match were still ones of disbelief as he recalls. “It was one of those days when I got to the club a bit earlier than normal, this huge team turn up to play a game and half an hour afterwards they are gone. I was looking around thinking did that really happen? It was still less than 24 hours since it was suggested that the game might be a possibility, yet there we were waving them off from the car park. Sadly, there were not many people there to see the game other than a few club staff and the Sociedad people, but it was all a very unbelievable experience.”

The game against opposition of such high quality seemed to do the young Stutes no harm at all as they went on to win four and draw two of their first seven matches of the season. But unfortunately, the momentum could not be sustained and, with the club also running into financial problems, the season ended in relegation to the Southern league. Our visitors that day finished their La Liga season in seventh place and made it to the semi-finals of the Copa del Rey but failed to progress from their Champion’s League group which included Bayer Leverkusen, Shakhtar Donetsk and Manchester United. How much of their success that season was attributed to their experience at Bridge Road is open to debate. 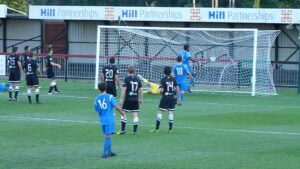 The final word on the day rests with Omar Beckles, now of Shrewsbury Town, who scored our late consolation goal (pictured) against the Spaniards. “It was a surreal and unbelievable experience. As an Arsenal fan, I’m a big fan of Carlos Vela anyway so to play against him and a team of such quality was a humbling experience. Most players will never get to play against teams and players of that quality, let alone score against them, so to get that goal just put the icing on the cake and made the day perfect for me. It’s so hard to explain how the whole day felt. I can’t find the words!”